The signing ceremony was held virtually, at CNNC headquarters in Beijing in People’s Republic of China and at the Studsvik Tech Park in Sweden.  The ceremony was attended by several important stake holders from CNNC and Studsvik, as well as local government officials, and a representative of the Chinese Embassy in Sweden.

During this important ceremony Mr. Gu Jun, General director of CNNC, stated “Studsvik is famous worldwide in the fields of nuclear fuel and materials characterization, in-core fuel management, reactor water chemistry and radwaste management. CNNC has business covering whole nuclear fuel cycle, being one of the world's top 500 ranked companies. The cooperation between the two parties is very important and beneficial to both countries and the world. This Nordic R&D Center is the first overseas R&D platform established by CNNC, serving as a platform for future CNNC comprehensive and in-depth participation in international cooperation.”

Ms. Camilla Hoflund, CEO of Studsvik, welcomed CNNC to the Studsvik Tech Park and expressed her recognition of the importance of the Cooperation Roadmap, stating “we see this cooperation with CNNC as an important step supporting China as the world’s leading country in building new nuclear power plants, which help reduce CO2 emissions.” Ms. Hoflund also wished CNNC success with their new Nordic R&D Center. 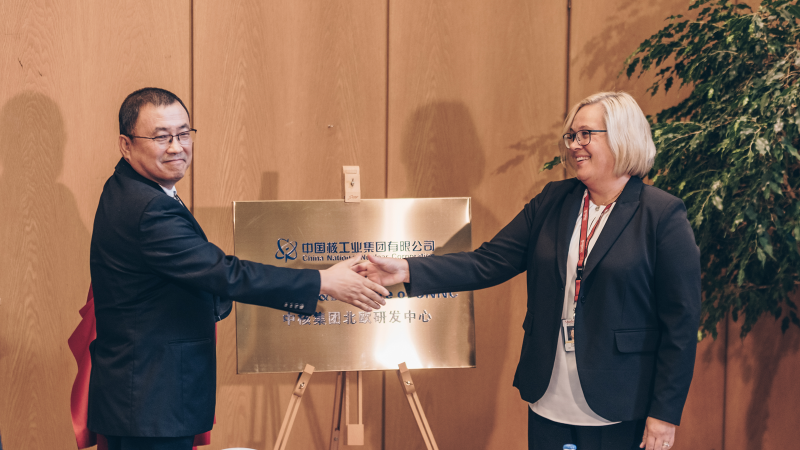 Local government representatives, Mr. Carl-Åke Andersson, (Chair of municipal assembly) and Mr. Urban Granström (Chair of municipal board from Nyköping) along with the Scientific and Technology counsellor of the Chinese embassy in Sweden, Mr. Ding Mingqin, also made congratulatory remarks on the opening of the CNNC Nordic R&D Center and establishing the Cooperation Roadmap.

Studsvik has established a legal entity in China

The office is situated in Beijing and the official address will be: Level 26, Fortune Financial Center, No. 5, Central East 3rd Ring Rd., Chaoyang District, Beijing, China